“It has taken a lot of time and effort to get to this point,” said John Montgomery, the chair of the Daniel Morgan Committee. “This has been a big project, very complicated, but it’s very important.”

“Downtown Spartanburg is the hub, with many branching spokes,” said Laura Ringo, PAL’s executive director. “This hub will allow you to ‘hop on’ and connect to almost every area of our community.”

The trail starts at the end of the Mary Black Foundation Rail Trail, taking people along Union, Kennedy, and South Converse Streets toward Barnet Park.

“There are many beautiful public spaces in our downtown and along the route, like the Chapman Cultural Center or Barnet Park, Denny’s plaza,” said Ringo.

There’s room for walkers, runners, and bikers on the trail. PAL leaders also said it’s a safe section through the busy downtown area.

“This is the first of its kind in the state of South Carolina. This is what they call a cycle track, and it has a raised concrete barrier to protect the users from traffic,” said Montgomery.

Ringo said the most important part of this trail section is its ability to connect people across the city.

“This project, though, is one of the most important to date for its visibility, symbolic value of connecting to Main Street, and so many connections coming from different directions,” said Ringo.

They also predict it will have a big impact on the local economy and growth in the area.

“I think we’re going to continue to see development pop up around the trail, more residential, more apartments because people see the value in trails and connecting them and promoting health and wellness. It’s a real community builder,” said Montgomery.

People can view a map of the new trail section below: 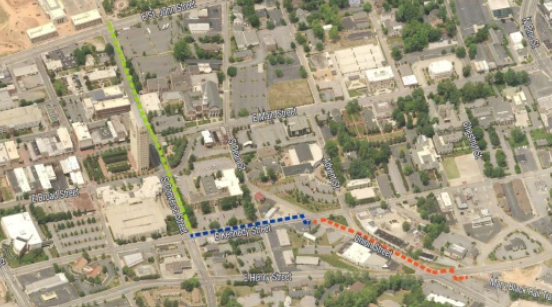