The RAISE route (in orange on map below) mostly follows the Fairforest Creek from Arcadia downstream to South Liberty Street and CC Woodson. A spur along Williams Branch to the loop around Spartanburg Airport, then crossing East Blackstock to RP Dawkins Middle School. Another spur will add bicycle and pedestrian facilities to WO Ezell from its crossing with the Fairforest Creek into downtown. 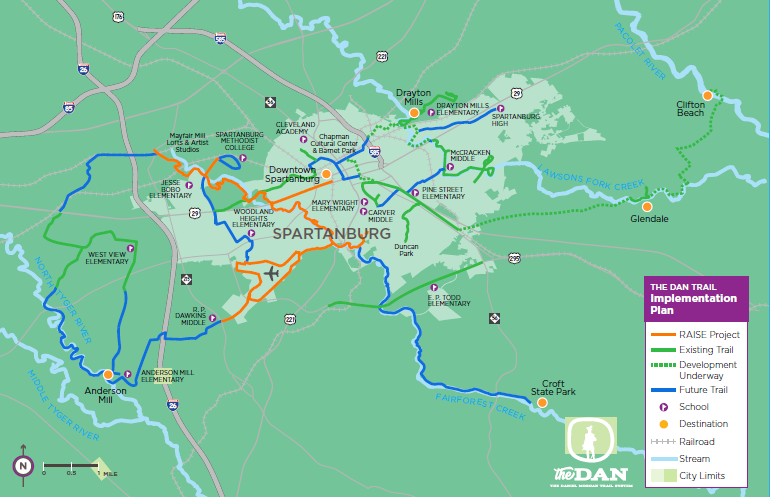 The pathway will parallel the Fairforest Creek. It will start at Mayfair Mills Lofts, connecting Spartanburg Methodist College and Jesse Bobo Elementary School, and tie into W.O. Ezell Blvd. There will be a leg going into downtown Spartanburg, which will connect to Park Hills, Highlands, C.C. Woodson Recreation Center and south side neighborhoods.

There will also be an extension to the downtown Spartanburg airport. The pathway will conclude at R.P. Dawkins Middle School. The pathway will not take away from existing vehicular lanes, according to Ringo. Instead, it will add new trails into neighborhoods and improve crossings at certain intersections. This pathway will connect into eight census tracts of poverty and will provide active transportation options for communities and individuals that cannot rely much on cars for economic, mobility, and other reasons.